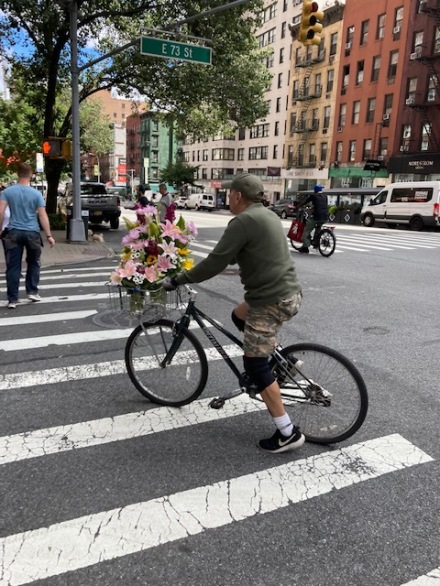 Pam Pictorama Post: It is a chilly September morning as I sit down to write this. We have a window open as we continue to try to air out the apartment from a persistent mustiness that settled on it as we tried to deal with clothing and a smattering of other items that were in our basement locker during the hit and run of Hurricane Ida. Coffee, the remedy to all things waking up, is perking (yes, perking, I actually still use a percolating pot) on the stove. Yesterday had the same September chill and I was thinking about how those first few chilly days somehow manage still to surprise us each year.

Every year we think it seems early, but it isn’t really as it is mid-September after all. And while we know that we will still have some very hot days still slated, somehow the spell of summer is really broken. As a kid I remember feeling that somehow that first day of school should have some chill in the air – it seemed wrong to go back to the school routine when it was still hot and you wanted to wear shorts and sandals instead of school clothes and hard shoes.

Rosh Hashanah commenced the Jewish holidays this week and welcomed in a New Year. I have always thought that the Jewish calendar of holidays was spot on – this is the time of the year when I think of starting over (it’s that back-to-school thing again), Yom Kippur shortly after which makes you take a hard look at yourself, and Passover as part of the renewal process of spring.

I have written a bit on and off about the potential return to the office – it is still pending and currently set for mid-October, Covid variants pending. (Among those posts are two here and here.) I have spent the summer with a mental punch list of things that I need to do in order to begin to officially return to the world. As a result I have seen a litany of doctors and gotten myself back on their roster of maintenance and taken their neglected battery of tests, ending with the dentist finally this past week. I have had a hair cut, although I think I am already due for another. My weight loss program is nearing its goal which commenced last November and took on the pandemic pounds first and then moved onto what I had needed to lose before it all started. I am hovering within five pounds of my lowest fighting weight, as I like to think of it. I started running last November as well and have largely stuck to it through thick and thin, pausing only for the worst snow over the winter and longer after breaking my fingers on Memorial Day. (The finger tale of woe can be found here and the story of my nascent running is here.) I am a person who finds comfort in developing a list of achievable goals and the ability to check them off as I go.

My office is still virtually deserted when I make trips there these days. We’ve cleaned and cleared the decks of old paper and tossed out the plants that didn’t make it on a visit as a group earlier this summer. It is in a state of perpetual weekend in my mind. I tend to show up for what I need to do there – checking the mail and the like – and I leave. There is no music wafting through the halls or out of the offices of colleagues. When I look around and try to imagine us all back I am reminded that many folks won’t be back – a staff of 16 which has whittled down to possibly as few as five of us returning to the office in my group and a similar proportion across the organization. The loss of a dear colleague, Jazz giant historian Phil Schaap, to cancer this week will linger over the common spaces we shared and his office. (His obit can be found here.)

As I cleaned my closets and purged moth eaten clothing (another of the tasks on my long list) I realized that we are all essentially two years older. I realize this should be self evident, but everything else aside I haven’t sat cheek to jowl with this folks every day for seventeen months and counting. I look at these clothes in wonder and think about whether I have any interest in wearing them again – they are a microcosm of another time. I don’t right now, but keep the ones that moths have not (yet) made visible inroads in and that look like they might fit and figure I will worry about that another day.

The world at large still has mixed feelings about in-person interaction, at least here in Manhattan. I have scheduled numerous visits with patrons I haven’t seen in person over the duration over the coming weeks. Some still only doing outside and others looking forward to live music inside. I have emailed and spoken with others who are not ready at all. Our jazz club, Dizzy’s, is full some nights and deserted on others following a rhythm none of us can quite decode. Showing my vaccination status everywhere I go will become law on Monday, but many restaurants and other public venues have already adopted it.

My work days are long again. I start very early before my run, work through the day and find myself drifting back to my desk after dinner. My intermittent insomnia has already put in an appearance, the mental calculator of millions of dollars to raise this year ticking away in my brain.

This morning I am reminded of when my sister Loren’s apartment was broken into while going to grad school in Chicago – after that she would frequently refer to things as being “before the heist” or “after the heist”. This would usually refer to something she no longer owned, but sometimes it would refer to other things like the acquisition of her large dog Ron – although I believe he was adopted after a subsequent spate of robberies in Berkley. I felt that way after 9/11 and then experienced a personal version after Loren died a few years later. World wide disruptions and personal ones, the great divides that change the path we thought we were on but were never really destined for. We will be talking about the before time and the post-pandemic one for a long time going forward.

Still, my back-to-school spirit remains intact and although I am still layering sweaters over sundresses (and have not committed to ever wearing anything but sneakers again), I am mentally starting to construct what this new world is going to look like for me and to some degree for my team at work. I remain ever interested in what the future will look like and what I will make of it now.