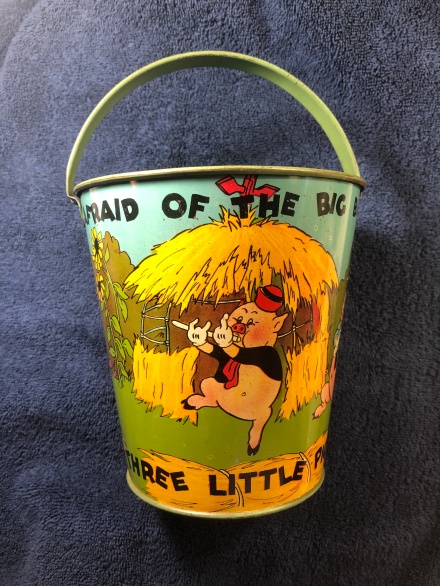 Pam’s Pictorama Post: This sharp little number is the other pig purchase made on in honor of my birthday, also from The Antique Toy Shop, New York. It is little, only about six inches high and is just the right size for a pint-size person.

This is a very sturdy little pail and, although it looks fairly pristine, it was well built for days of sand castles at the beach and the like and may have seen days of service. As a former sand castle building aficionado I note only that although the handle moves it does not go all the way down. This would be very inconvenient for the making of towers from piles of wet sand and the like. It looks as if it is nicely water tight however, which is another important feature, hauling water from the ocean to your construction site and all.

Unlike the mug featured yesterday (see that post here) which shows the pigs having firmly trounced the wolf, this one shows two irresponsible pigs at play and the stolid one with his bricks, building, with the Wolf in his full glory. Whose Afraid of the Big Bad Wolf ?is around the top. The responsible brick laying pig has wolf proof paint (something I think we could all use, right?) and the other two dance a jig in front of the half finished straw house. (This shoddy straw house looks a bit like one of the shacks from the Gilligan’s Island reruns of my childhood. I watched them every afternoon, The Flintstones on one side or the other of it. If I ever saw those again I could probably recite parts of dialogue.)

The stick or wooden house is absent. I have remarked before that the swift collapse of the wooden house confused me as a child who lived in a wooden house. My parents failed to supply a sufficiently comforting explanation to me and I can only hasten to point out that you will find Deitch Studio located in a large brick high rise building.

This pail has a mark from the Ohio Art Company, a tin lithography company still in existence today. It’s a good story and I share an excerpt from their history, from their website:

Dr. Henry S. Winzeler, a dentist in Archbold, Ohio, who sold his practice because he was convinced novelty manufacturing held great promise for him. Renting part of a band hall and employing 15 women, the company was soon shipping picture frames to all parts of the country, as well as Canada and Mexico. Business grew rapidly and Dr. Winzeler needed a larger plant.

Through the efforts of local citizens and the Chamber of Commerce, enough money was raised to build a new factory and lure The Ohio Art Company to a new location – Bryan, Ohio. With larger quarters and better shipping facilities, the firm continued to grow…Soon after the move to Bryan in 1912, the company installed metal lithography equipment, an addition that would shape the company’s future. New items began to appear; advertising signs, scale dials and a few small wagons, representing the beginning of a long and successful run in the toy business.

When WW1 halted the flow of German toys to this country, American manufacturers had a tremendous opportunity to surge forward. Quick to realize this, Dr. Winzeler increased his line of toys and toy parts and business boomed. A quality (and very popular) tea set line was introduced, and in 1923, sand pails appeared. In the early 1930’s, Ohio Art was one of the very first companies to license a character from Walt Disney for a toy; Steam Boat Willie, the precursor to Mickey Mouse. Other successful early metal lithographed toys included tops, shovels, farm houses, drums, globes, checker sets and more.

Once plastic takes over in toys the company diversifies again and makes the film canisters for Kodak and premiums for companies like Coca Cola and Budweiser even today. The mark on this pail, Ohio Art Co Bryan O USA, refers to the company’s post-move location in Bryan, Ohio.

So, my advice is always be mindful of construction materials, build thoughtfully and work hard – and then you too can dance a jig and sing, Whose Afraid of the Big Bad Wolf?