Pam’s Pictoram Toy Post: Oh joy and bliss! My first of several post-birthday posts is devoted to this utterly magnificent birthday gift from Kim, the most unusual of the Aesop Fable dolls in some ways. This toy came to me via a lovely toy dealer in Belgium, Regine Beghin, who has been the source of several holiday and birthday acquisitions in recent years. I will hope that my travels eventually land me nearby so I can say hello in person one day. (That does of course have the potential to be a very expensive trip indeed.)

Unlike his brethren, this is the only one of the dolls I know of with a very different body type, a strangely long skinny neck and puffy tail. As seen in this publicity photo below, the others are largely interchangeable bodies, different heads, clothes and expressions. So now comes the big question – what animal exactly does my new friend portray and what is his name? Looking at my prior research, presented in my post Mine, all mine…at long last – a personal favorite post – I listed the names for those characters as identified on the back of the photo, but realize this fellow remained nameless!

Photo from the Pams-Pictorama.com collection

Google remains stubbornly inadequate on information about these Aesop Fable toys. In fact, it has gotten to where Google images on the subject are mostly my toys and posts! I reached out, deep into the toy network, and tapped a friend who I consider the Kingpin of Toy Lore. Mel agreed that he had always thought this was a fox (Max Fox perhaps?), but in examining the Aesop Fable hankies book – he owns his own copy, but some of you know this was recently the subject of some covetousness on eBay by yours truly – all the characters are laid out and identified. It would appear, as shown below, that this fellow isn’t a fox (or a wolf) after all – he is evidently Al Squirrel! (This and some much more can be seen at melbirnkrant.com.)

I must say, on the face of it a squirrel seems like a strange animal to attempt immortalized as a cartoon character. I kind of like the fact that they gave him such a straightforward name – Al. Upon reflection, perhaps a wolf or a fox carries negative cartoon connotations. (Think Three Little Pigs for starters.) Squirrels, on the other hand, are industrious, hard working little fellows. I suppose more likable – although the image above is anything but, holding a dead rabbit and a ditty about shooting a bee. Hmmm. Bottom, line, he is clearly a bit of a stretch aesthetically – more foxy than squirrelly  however.

I will note that this little fellow of mine seems to have replacement eyes (as above all of the dolls with open eyes have flat black pasted on ones, mostly but not all pie-eyed) and as a toy collector I should care about that, but his eyes are very fitting and I admit to liking them very much despite being later replacements. Otherwise his is in very good shape overall.

In the process of writing this post I realized something else – in the above photo the Countess, the character at the far right, has different feet than all the others. I own two (yes, two – for the most recent acquisition see the post about that variation on a theme Aesop Fable Doll – the Prize!) Countess dolls and neither has those strange feet. Additionally, in what I now think of as true Aesop Fable tradition, my friend mentioned above also noted that his “hankie book” had a different cover than the one on eBay.

Finally, to muddy the waters further, below I share a photo of a partial doll I have, given to me by my friend Zach Sigall a few years ago. This was clearly another variation on the Wolf, Fox, Squirrel figure and is substantially different than our friend Al. Although his tail is missing, he doesn’t have the skinny neck and there’s no indication he had the fat tail. Unlike the other dolls his eyes are painted on and could not come off at all – other dolls seem to have eyes that are very firmly attached, but applied on. If we are using the hankie book as a reference or guide this fellow does not seem to have a match – perhaps there is a Max Fox after all.

I remain totally enthralled and fascinated by what appears to be the mix and match mysterious nature of this enterprise. I cannot help but wonder if, like the East End shop I wrote about that churned out many of the more off-model Felix toys I enjoy today, this was not also a fairly small company that just randomly combined pieces to assemble these toys. Meanwhile, as for me, that means that I can dream about there being almost endless variation on each of these toys I can hope to some day find! 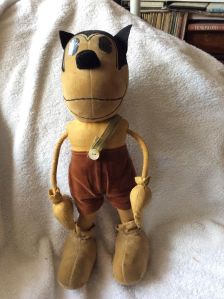 Which doll is this?

Pam’s Pictorama Toy Post: I have a deep relationship with both the Aesop’s Fable cartoons and these splendid toys. (For another post on the subject and my collecting mania in general see my earlier post, Mine, all mine…at long last.) When I discovered the cartoons, well into adulthood, I felt as though these were finally the long lost cartoons I had always been looking for. Reel after reel of endless black cats and mice – chasing, charmingly anthropomorphic. I share an example that somehow is a high water mark for me Makin’ ’em Move, In a Cartoon Studio. It is, of course, animator cats, dogs and pigs, slaving away at the drawing table – just like something out of Boulevard of Broken Dreams…one of my favorite Kim Deitch books!

The existence of the toys came to me even later, but I fell hard for them. The promotional photo below was my introduction to them. Not surprisingly, the cat in the polka dot skirt was my first acquisition – The Countess. I bought her in a Hake’s auction (I believe Kim helped on that one – in fact I believe he’s had a hand in helping to purchase virtually all of these. He’s very nice about supporting my habit.) We really paid up. She is pretty pristine. The dog in the red pants (Don the Dog) came off of eBay and I got a pretty good deal. The very hurt one on the lower right (another version of The Countess?) Kim picked up during a visit to San Francisco a few years back. The slightly grimy one in the maroon corduroy, I frankly don’t remember acquiring, although I am thinking it must have also been on eBay – he seems to have been altered and I am not sure who he is – Raffles is my guess.

The good news and the bad news it seems is since people don’t know what these dolls are so one most often just stumbles upon them. 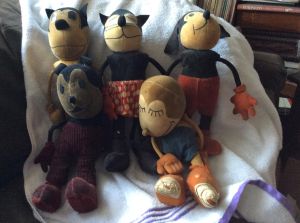 The question I pose for today is – which doll is this new one? It is generally thought that these six were it. But careful study shows he just isn’t one of them – and he’s in pretty pristine condition so I don’t think he’s been altered either. Any thoughts out there in cartoon land? 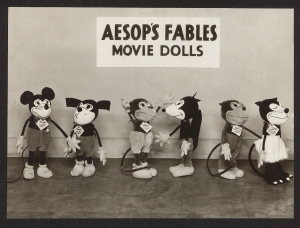 Lastly, this tidbit I turned up while searching for the new doll. This is an old advertisement for a theater contest giveaway of Aesop’s Fables dolls! Oh lucky people of the past. Evidently the outsized Countess was four feet high and a replica of the doll! Would love to find that some day. As I’m sure you know, I will just keep looking. 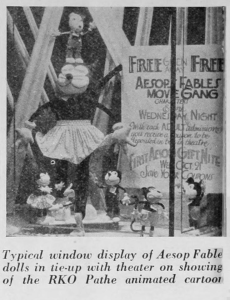