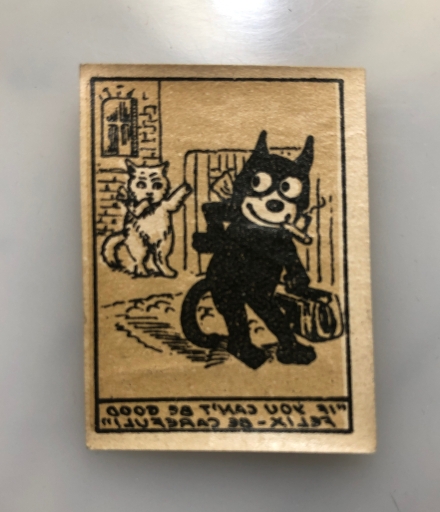 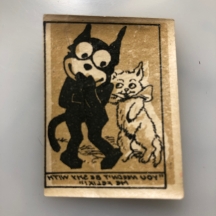 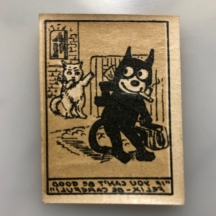 Pam’s Pictorama Post: My guess is that many of us have had the odd sticker, card or bit of stationary which has somehow and for a truly unknown reason survived, unused, year in and out until a decade or more has passed and somehow, despite relocation of home and hearth, and perhaps amongst the loss and damage of more meaningful things, certain items seem to persist unscathed. It is some strange law of averages it seems. However, most of these such items cannot, yet anyway, lay claim to being almost 100 years old like I suspect these Felix the cat stickers of being. While many (most) of the items I collect share a similar history, few are as ephemeral.

This pair of tiny stickers (just a few inches each) traveled to me from Australia, found on ebay earlier this year. In design, they are very similar to a series of series of British chocolate cards, although sketchier. I wrote about my small accumulation of those in my post, Chocolate Felix (It can be found here. I also have a some chocolate cards featuring Felix from Spain and a post about those can be seen here.) 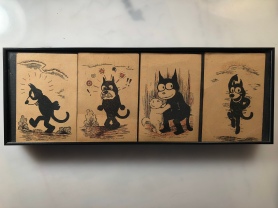 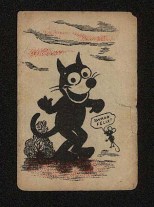 It isn’t the same hand making the art, but a reasonably close fellow traveler in Felix forging I would say. Felix is with his girlfriend, Kitty, here or as I tend to think of her, the White Cat. I have never warmed to Kitty. It isn’t unprecedented that they are a carton or comics couple which appear to be different species of cartoon cat-to-cat with strange proportional difference, but it annoys my aesthetic sensibility. Create a world image and stick with it dammit, I say!

Wikipedia says that Kitty’s first appearance is in 1919’s Feline Follies and she is prominent on the Felix tea set of the day as well. I own one plate, shown below, but the same image appears on all. I wrote about it in a very early post back in 2015 which can be found here. 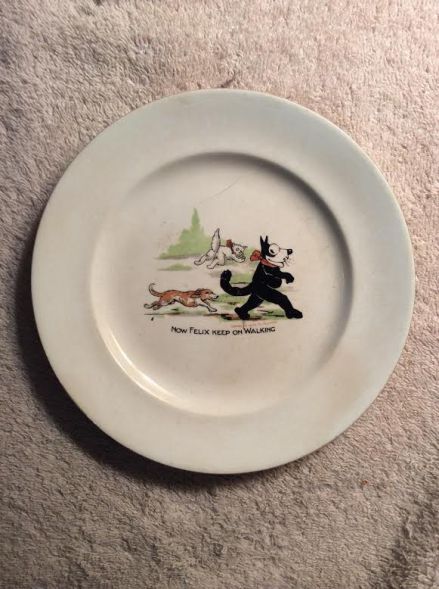 This illustrates that it isn’t just Kitty – the dog is also rendered realistically. It appears that Felix exists as an outlier even in his own world, the odd cartoon mouse notwithstanding.

For those of you who don’t have a mirror handy, shows Kitty, the siren kitty waving and her come hither remark is, You needn’t be shy with me Felix. The second one offers him very good advice, If you can’t be good Felix – be careful! Indeed!