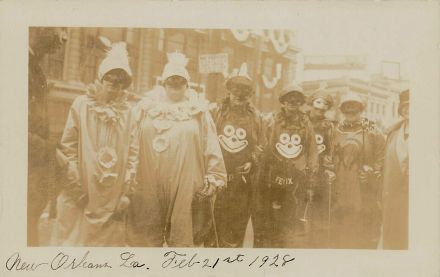 Pam’s Pictorama Photo Post: Today’s card is a bit faded, but nonetheless a great addition to the Pictorama collection. While I am pleased to have acquired some outstanding photos of folks sporting Felix Halloween costumes and Felix (and Mickey) in some great parade shots (some of those can be seen in posts here and here) I believe this is the first Mardi Gras Felix photo I have acquired.

Identified at the bottom as being from New Orleans La. February 21st 1928 I checked and confirmed that this was indeed Fat Tuesday, the kick off for Mardi Gras, that year. It is a photo postcard which was never mailed and there is nothing else written on it. (Fat Tuesday is of course the celebration on the Tuesday before Ash Wednesday when eating and drinking reaches a frenzied peak in order to tide you over through the period of Lent.)

All participants are in similar, mostly, black masks and all wear jolly hats in addition to their costume and a close look identifies that they are all women. While these clowns, in their silky costumes, in the front are perfectly lovely, it is of course the group of three wearing these early grinning Felix costumes that won me over. It should be noted that a close look reveals that there is a fourth participant wearing a perfectly great black cat costume on the end.

Neither of the occasions I was able to make brief visits to New Orleans were during Mardi Gras and many years ago now. While I wouldn’t be surprised if my work eventually takes me there again I unwittingly stumbled onto a Fat Tuesday tradition at Dizzy’s, the jazz dinner club associated with Jazz at Lincoln Center, this year.

Alphonso Horne’s Gotham Kings make an annual Mardi Gras appearance at the club and this year it could only be described as a raucous and joyous celebration of their return to Dizzy’s on Fat Tuesday after a two year online hiatus. When one of Alphonso’s trumpet players was unable to make the gig he engaged four others for a total of five on stage. Trumpet players called to each other from locations across the room as they emerged from the audience, kicked the show into gear and made their way to the stage where they joined the rest of the band and a tap dancer. (I do love a tap dancer!)

The performance was capped off by the vocalist C. Anthony Bryant singing What a Wonderful World. The tune is far from a favorite of mine, but there wasn’t a dry eye in the house that night. (You can see a variation of the band performing it – in a Manhattan apartment – on a Youtube video here.) So while it is unlikely that I will make Mardi Gras in New Orleans next year, I know where I am likely to be.