Pam’s Pictorama Photo Post: This little find caught my eye recently and I decided I really needed to own it. These early vaudeville-type animal acts seem to be a fascinating sub-genre and I can’t resist them. Quite awhile back I found and wrote about another French card I believe is from the same period with small dogs and a cat piled on a larger dog (shown below – it translates as Dog Scholars and the post about the card can be found here), and earlier than that another somewhat primitive but favorite card for an animal act called Mad Betty (find it here) which was in the United States, on the west coast. Finally even a bit more frowzy, Dashington’s (here), also American. Alfred Latell and my posts about him (here and here) and his vaudeville act must be counted as well. 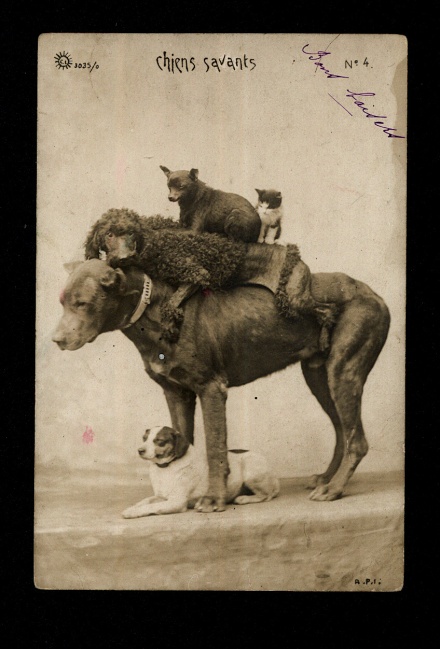 The Clown-Boby card was never sent, nothing inscribed on the back, and therefore my thoughts on dating it are approximate, however Chien Savants is postmarked 1905 and I think it is fair to assume that this is from the same general period. Clown-Boby’s card declares that he is a Membre de la Société protectrice des animaux and we are glad he wanted to acknowledge that he took good care of his animals. Despite his very scary white clown face, he does have a sort of kindly look – although I must say if I was going to be afraid of clowns Boby is where I might start. The quality of the postcard printing is a bit low and primitive – cut poorly along the bottom with a white strip and overall a low resolution job.

The cats shown are a varied group mixing spots, stripes and between, although each wears a bow – with one in a sort of royal ruff and I wonder if he was the lead kitty. As cats will, some look engaged and others annoyed. Lead cat is slightly blurred because of course getting them still is another matter entirely. And I like the variety – ending with a smart looking tabby. I do wonder what the act was like, my imagination probably beyond the capacity of Clown-Boby.

Sadly I could find no history of or reference to Clown-Boby and his act online. I did however, find the image below showing him with a rooster act declaring Clown Boby and Miss Mosa Original Dressuract. (Can anyone out there translate dressuract to English?) He appears a bit younger here with Miss Mosa if you ask me, and it is in reality a bit whackier and charming photo altogether. (I will admit that Google Images did not want to share this photo and I apologize for the digital thievery.)

I cannot help but wonder if and how the kitties shown in my card got along with Miss Mosa and company – or perhaps more likely that they were a sufficiently subsequent generation of the evolving act.

Not in Pams-Pictorama.com collection