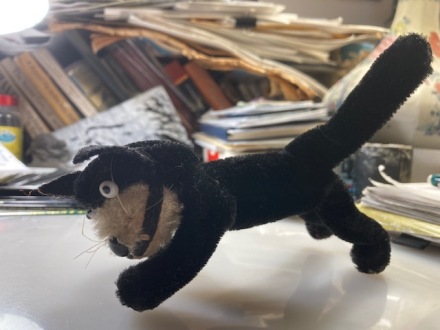 Pam’s Pictorama Post: It is always a great day at Pictorama when I get to share a new Felix and a few have arrived at our welcoming shores recently. Due to a bad case of life in general Christmas arrived a bit late at Deitch Studio this year, but that made these acquisitions no less beloved as additions to the Felix family. The collection has grown so over the years it can be a bit difficult to find toys that are distinctly different enough to add, but these are worthy additions indeed.

These Felix-es hail from Peter Woodcock, the dealer who recently sold me the simply amazing Dean’s Felix this past fall in an online British toy sale. (That post can be found here.) In late December I threw myself on Peter’s mercy to supply both Christmas and birthday (February!) gifts this year and he responded splendidly with three Felix toys, the first which is being featured today.

A friend recently told me in an email that I was the first person to ever take her into an antique store. I am not sure I was aware that it was among my accomplishments, nor do I remember the occasion, however we went to college together so I assume it was during that time. Given a reasonable proximity to antique stores or even junk stores (New London, Connecticut was more junk than antique by far), it is hard to keep me out of them so it seems distinctly possible – putting aside for the moment the question of who hasn’t been in an antique store before reaching young adulthood?

Meanwhile, I had been nattering to her about my recent affection for insect jewelry of the early years of the 20th century. (Subject matter insects, not made of insects – which yes, does seem to have been an early 20th century thing – I am more celluloid firefly than Felix depicted in butterfly wings. All about insect jewelry posts can be found here and here.) She pointed out that my aesthetic and interests had always converged on the dawning years of the 20th century.

Pictorama readers know that in recent decades that interest has been directed largely to things early Felix the Cat and perhaps most especially those items which celebrate the somewhat off-model, askew evidence of the human hand. The revelation that some such a work force on the East End of London, (made up of indigent women as a social service scheme) in the 1920’s was one of the favorite fun facts I have ever turned up in my research. (That post can be read here.)

I suspect that maybe today’s little fellow hails if not from that collective perhaps from a similar British enclave of toy production. He is the second entry of a horizontal Felix in my collection and if I have seen many more I do not remember them. Christmas of 2015 brought the first to Pictorama, shown below. A post devoted to him, for those of you who are a bit completest like me, can be found here.

Today’s featured fellow is smaller, a scant five inches or so. He is made of a plushy velveteen-y fabric. His head is (was?) somewhat swerve-able. He maintains his sparse but prickly looking plastic whiskers on both sides; his pointy ears are an ancient felt. While he has glass eyes like the one above, his have a slightly more insane expression (right?) and his black nose maintains its gleaming black. I like his sturdy tail which sticks up, almost like a fifth leg. His muzzle has also kept its mohair fluffiness.

Although Felix as an early cartoon entry certainly spent a fair amount of time in a catty horizontal run, we tend to think of him in his anthropomorphic semi-human vertical form. While my previous acquisition was a bit more catty than Felix usually is, this one captures the spirit of the cartoon in that regard – Felix in motion.

Newly transplanted to the shores of the United States, this little guy joins the Pictorama collection with a place of pride on a Felix devoted shelf near my desk where savvy visitors via Zoom get to see him featured daily. Thank you Peter for parting with him!