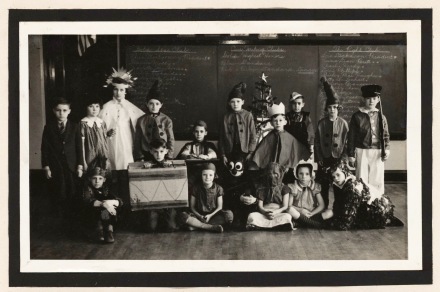 Pam’s Pictorama Photo Post: As some Pictorama followers know, I have long favored Instagram as my favored social media poison pick. Kim is devoted to tending the curation of his Facebook page, but I prefer to pleasantly lose myself scrolling through my iteration of the universe which skews heavily into vintage jewelry and clothing, antiques, cat doings (go @sadieanddottie!), the antics of some real world friends, and of course early photos.

The viewing world in return gets a version of me (@Deitchstudio) which includes these blog posts and related photos, the comings and goings of Cookie and Blackie lovingly chronicled, story vignettes of my morning runs along the East River (walks for since my great fall, see my post Busted, here, for that tale of woe), and in the before times my occasional travels with the Jazz at Lincoln Center orchestra as the fund raiser for that organization. I try to avoid any whiff of politics and try to keep the chaos of our tiny abode visually within bounds admittedly. Photos of Kim only with his knowledge and permission. Selfies rarely, usually just with friends.

When I look back on this time I think I will mostly vividly remember scrolling through IG and watching home renovation tv.

You all over here at Pictorama get more insight into the inner life of Deitch Studio, but the folks over on Instagram get a daily visual account of me and mine. Obviously there is crossover and I know many of you follow me there and a few of the folks who I “know” only from IG wander over to Pictorama on occasion. (There are some triple crown folks who are FB friends too!) It is a happy day when these parallel Pictorama worlds collide and today (and likely tomorrow) will highlight some finds attributable to those folks.

Today’s splendid photo find (you were wondering if I would ever get to it I am sure) was purchased on eBay. The listing made no mention of the presence of Felix in their midst (nor cat costume photo) so I wouldn’t have found it without the tip from @the_antique_lens. I only know them by that moniker, no name on the account or bio information. Unlike many of the folks I interact with the_antique_lens is a collector, like me, not a merchant.

Their exquisitely presented account reveals what seems to me to be a remarkably similar visual taste in early photos to my own (Felix notwithstanding) to my own, although less specifically focused than my heavily cat/toy related collection. It is with thanks to them that this little beauty found its way to the Pictorama collection. A thank you to their eagle eye and generosity in the tip.

The photo is oddly mounted on pieces of paper that have resisted the glue applied resulting in ripples. It does not appear to be from a photo album – I think maybe framed at one time, but there are push pin holes in the top corners and one side so it spent some time displayed that way. There is a bit of black tape across the bottom mystifies me which Kim has edited out in this scan. Nothing is written or indicated on the back.

It is an interesting photograph. At first glance you might think was taken for Halloween, but the Christmas tree makes me think not. Perhaps a school play? Felix is especially curious in this case (hard to think of what that story line might be, but he is front and center), however given that several children wear similar costumes school play gets my vote. The costumes have a consistent quality too, all of the same quality. I am sure I cannot imagine a story that might incorporate the kid dressed as a gift box, an Indian, the little girl with a burlap bag over her head and the imaginatively rendered bear in the lower right. I am especially enamored of the teacher’s fairy costume, and as Felix the Cat costumes go, that is one I want!

The photographer had a good eye for framing this, especially if he or she arranged everyone. However I also feel that the photo maintains the aura of the stage presence of the kids – they do not mug, or even mostly smile much. There is a look of shared purpose and focus to them and they gaze directly at us. I am especially fond of the rifle bearing soldier and bear on all fours holding down the composition on the right, while the white fairy costume draws you back to the left.

A careful examination of the writing on the blackboard (a credit to that instructor’s neat hand which I am attempting to read more or less a hundred years later) appears to list three clubs. Furthest to the left (and easiest to decipher) states, The Right Club, Lois Dickason, President, and a list of names. The center reads, Our Writing Clubs, Gold Highest Honors, Blue Standard, Red Below Standard. (Underlined twice!) I can barely make out what it says on the board behind the teacher, but it appears to be, Gold Star Club, Ellen Montgomery, President, and a list of names too faint to decipher.

The Right Club and the Gold Star Club names listed have one or two stars after each name. (I would like to point out with girl Presidents of each, clearly the girls here were doing an excellent job representing for the fair sex.) The scrawny Christmas tree with its star is a poignant seasonal touch.

This is one of those photos that allows you to time travel and I think wall worthy – a tribute here in the cramped environs of Deitch Studio. Hope you enjoyed the trip.

Pam’s Pictorama Photo Post: A general rule of thumb at Pictorama is that I only post about items I actually own. However, I have lifted the ban today in favor of an item I missed on ebay recently and in light of fewer items finding their way to Deitch Studio due to our current bunker lifestyle and a strict money diet. So with apologies to whoever was lucky enough to purchase this card I offer it to you today.

I was willing to make an exception to the money diet in favor of this item, but I just didn’t act fast enough on it being a bit distracted from my usual endeavors. This photo hails from Great Britain and the location on the back is identified as Easterton Wilts in penciled print. (This is a photo postcard and it was never mailed, nor is anything else written on the back.) The location appears to refer to Easterton, Wiltshire, a small town not terribly far from places like Bath and Bristol it seems, at least according to my reading of Google maps.

While I located this photo because of the rather splendid Felix costume clad individual, I am especially enamored of the two person horse (donkey?) get up, with those fellows sporting such serious oxfords, as is the gent in the gorilla mask. Felix could be man or woman, feet are hidden and hands in gloves. (Since all shown appear to be men I will assume Felix is as well.) I will just say, I would REALLY like to own that Felix head mask! (Yes, I would find room for it despite space being at a premium here at Deitch Studio these days.)

The splendid horse costume has a semi-professional look, as do the other costumes, although the gorilla suit (mask notwithstanding) seems a bit thin on detail. It puts me in mind of one my favorite posts (and items) about a book of fairly ambitious circus costumes you could make yourself – provided you are smarter than I am and much handier in general. The book and the post are called How to Put on a Circus and it can be found here.

The countryside stretches out behind them as far as the (camera) eye can see – just some thatched cottage and a small grove of trees in the distance. A nice little marching band is tuning up behind our group, you can almost hear them. Last, there is the blurred image of a man moving too fast behind the “woman”. I don’t know if this was a little parade or some sort of a fair or festival. Perhaps a bit overcast (much like it is here today as I write this, looking out over the East River) but a very jolly day I am sure.

Pam’s Pictorama Photo Post: To start with we at Pictorama must acknowledge a significant debt to the modern miracle of Photoshop as well as Mr. Deitch who was at the controls. These photos suffered miserably from ham handed amateur printing – and perhaps equally unskilled shooting of the original photos as well. This trio of photos are pallid and over-exposed in their original forms, and have undoubtedly faded additionally with age as well. Nonetheless I saw the potential when they went on sale. While it is sad to have photos in my collection that cannot really be enjoyed on their own, it is nice for them to have another life here at Pictorama. They appear to have come out of albums and none of them have any information along with them. Clearly they meant enough to the people in them to have kept them all these years, overexposure not withstanding.

Meanwhile, I am just mad for the Felix the Cat costume! It is just the sort I have always hoped to find on eBay and snatch up for myself. It is hard to see, but this little girl has her pageboy cut hair tucked smartly into the cat-eared cap – those ears are the best part of the costume for me! However, worth noting that there are girl and boy Felix-es dancing on the front, smaller supporting white cats in each corner, and the capper of a long tail draped behind her. It is a splendid costume and she is very pleased with herself, as she should be. No less notable are the spiffy, shiny, Mary Janes both are sporting here with their costumes. Our Miss Moffett is no less pleased with herself and this dress, which I hope ultimately saw additional wearings because it is so beautiful. It is so cleverly designed and beautifully made, and the big fat spider tied with a ribbon bow to her arm is a perfect finishing touch. (Full disclosure, there is another photo of just her, an 8″x10″ sold with the group, but it is blurry and it didn’t seem worth including.) I like the almost haughty expression on Miss Moffet’s face too – she is embodying her role fully.

Our little Mother Goose below appears a bit younger, but no less costume proud. Nor should she be with her delightfully frilly dress and this nice stuffed white goose. She has a sweet, shy smile in her photo, peering out under the brim of her peaked hat. If only the photographer had been as skilled as the talented soul who made these costumes. It must have been very frustrating to only have these poor faded remembrances of them and this magical Halloween celebration! 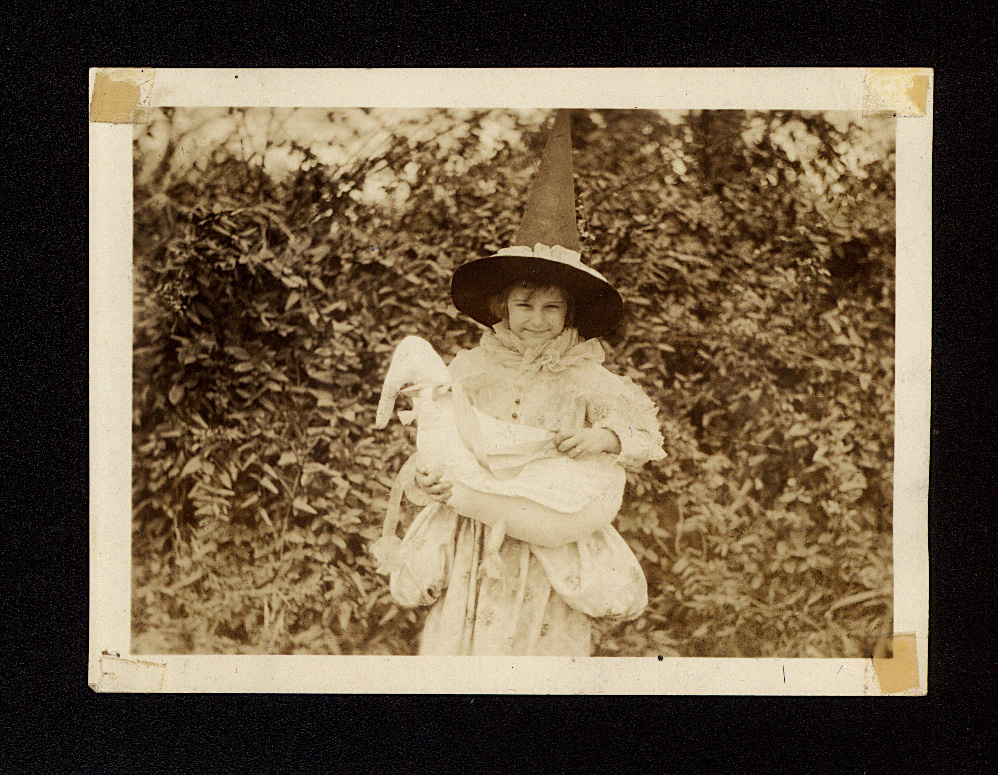 Last in this group and appearing to have been taken by someone else entirely, although perhaps even a different day, are these youngsters dressed up like the graces. As Kim said, this photo appears to be moments before a better one was taken in which they organized themselves a bit better in their poses. Still, there is plenty of charm in this candid photo of these girls, costumed up and enjoying themselves in this long-ago, overgrown backyard, all of which probably lived on in memory for each of them as a very fine time indeed.