Pam’s Pictorama Post: A month or so ago, someone on Facebook sent me some photos via Kim of really unusual Felix Christmas cards. They were not for sale, but on a site where they were on display as part of a collection. I had never seen them or anything like them before and loved their strangeness. I save the images for my own edification (shown here above), but unfortunately have lost both the link and the name of the person who sent them. (Apologies – and if you remind who you are I will happily update this post!) Shortly after, in that way that the universe seems to have sometimes, one of them turned up on eBay, in mint condition although used, and I snatched it up.

These cards are British and there is a tiny embossing at the bottom of the back of this one which says Raphael Tuck & Sons Ltd. Publishers to the King & Queen Produced in England with a crest of sorts which is very hard to see. A quick check online tells me that Raphael Tuck and his wife Ernestine, started the business out of their home in Bishop’s Gate in 1866. They received the royal nod in 1893 and carried the royal imprimatur from that point on. Evidently the company rode the crest of the Victorian novelty postcard and book craze and published the likes of my friend Louis Wain. The business stayed in the family, first bringing Raphael’s brothers in, and then Raphael and Ernestine’s sons. It flourished until their headquarters was severely damaged in WWII during the Blitz and, although they stay in business until 1959 they never fully recover.

Also, printed on the back is “Felix – Pathes Famous Film Cat” in tiny black letters. The outer wrapper is the glossy printed image of Felix and the inside is a separate piece of paper – held together by the ribbon like a tiny four page book. The inside is printed on slightly different stock. In case you cannot read it, under the black and white cats it reads, Snice World this! It is not technically the most festive holiday card I have ever seen – the front, Felix gets the Bird! Lucky! anyhow! doesn’t exactly scream Christmas to me. It is a nice, early Felix though, squared off and pointy the way I like him. Those exclamation points emanating from his head are cartoon great and embody his spirit nicely. If it wasn’t for The Compliments of the Season on the inside, and in spite of the jolly red ribbon, we would never know to mail this for the December holidays. This card, in splendid condition, was used and is simply signed on the left, inside, from Frank, in neat script. 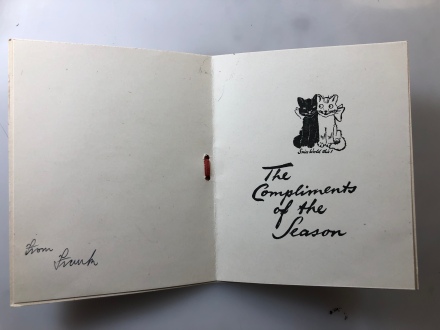 The other cards, supplied from the original link and shown on a loop above, are also super strange images for holiday cards, but nonetheless bear tidings for Christmas and the coming New Year on the inside of each. It almost seems as if the company printed a random series of Felix illustrated outsides and then neatly, if somewhat haphazardly, tied them together with holiday greetings insides. Felix being so popular at the time that appropriateness of message and image mattered not perhaps? In one, Felix with a sort of strange turnip which looks like a monster; Felix wearing a radio headset, and of course mine where he talks to a bird. The messages on the front of each are equally odd, Felix Gets the Bird! Lucky! anyhow! on mine and the others A Turn-up for Felix, Good Luck to You! and Cherio! The supporting characters, inside and out, appear to belong to an entirely different inking hand. More mysteries of Felix here to uncover, but jolly for a Christmas in July I think.